Cause & Effect died yesterday—or at least, that’s how it seems from down here.

No one can keep track of why things happen anymore. Not the things that you can see happening—those are easy enough to figure out—but the forces you can’t.

The logic of our planet and the systems that dictate everything on it seem invisible — not translucent or crystalline, but camouflaged: we can’t pick the logic apart from everything else. It’s too noisy, too fast, too complicated, too mistranslated, too much.

Donald Trump is running for president because of your meme accounts. Your uncle got cancer because 30 years ago someone in Washington spilled coffee on some documents. In the words of Peter Pomerantsev, “A butterfly flaps its wings in China and a village in Birmingham goes unemployed”.

Any attempt to follow the chain of cause & effect is like fighting a hydra. You cut off one head, and two more come back in its place. For every cause & effect discovered, there’s a cause to the cause and an effect because of the effect, contradictory information, a Wikipedia disambiguation page and a few straight-up lies.

WHERE IT BEGAN & WHERE WE ARE

If we understand why things happen, we can react, we can make decisions, we are in control.

The logical, data-centric rhetoric of industry, computation, and globalization has not failed. Events continue to cause other events, organizations still make decisions based on data. This rhetoric has, however, failed the individual.

You can trust logic as a way of making decisions and facilitating understanding when there are five roads in and out of town. Now, the roads are multiplying faster than you can count them, some of them are changing direction based on other roads, some of them don’t even look like roads anymore, and the rules of what makes a road and who can use them have gone out the window.

It's a well–documented fact that people have senses, and for a long time, these senses served us well. We would see a wolf approaching and react accordingly, we would listen and be able to understand what others were saying.

These senses were reliable enough to keep us flourishing and informed. There was information that we couldn't perceive—radiation, animal communication, continental drift—but most of the time, it didn't affect us as individuals. 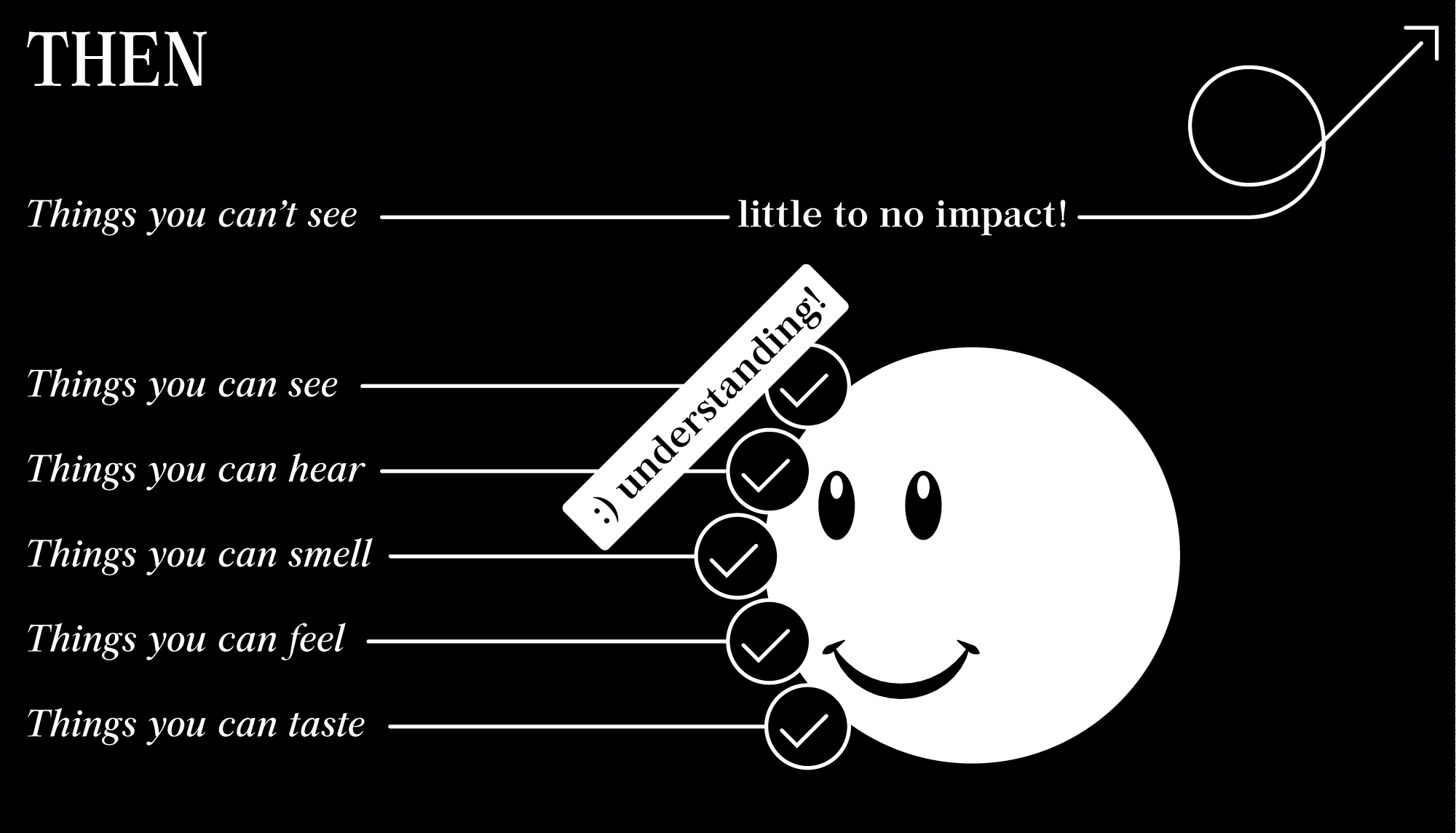 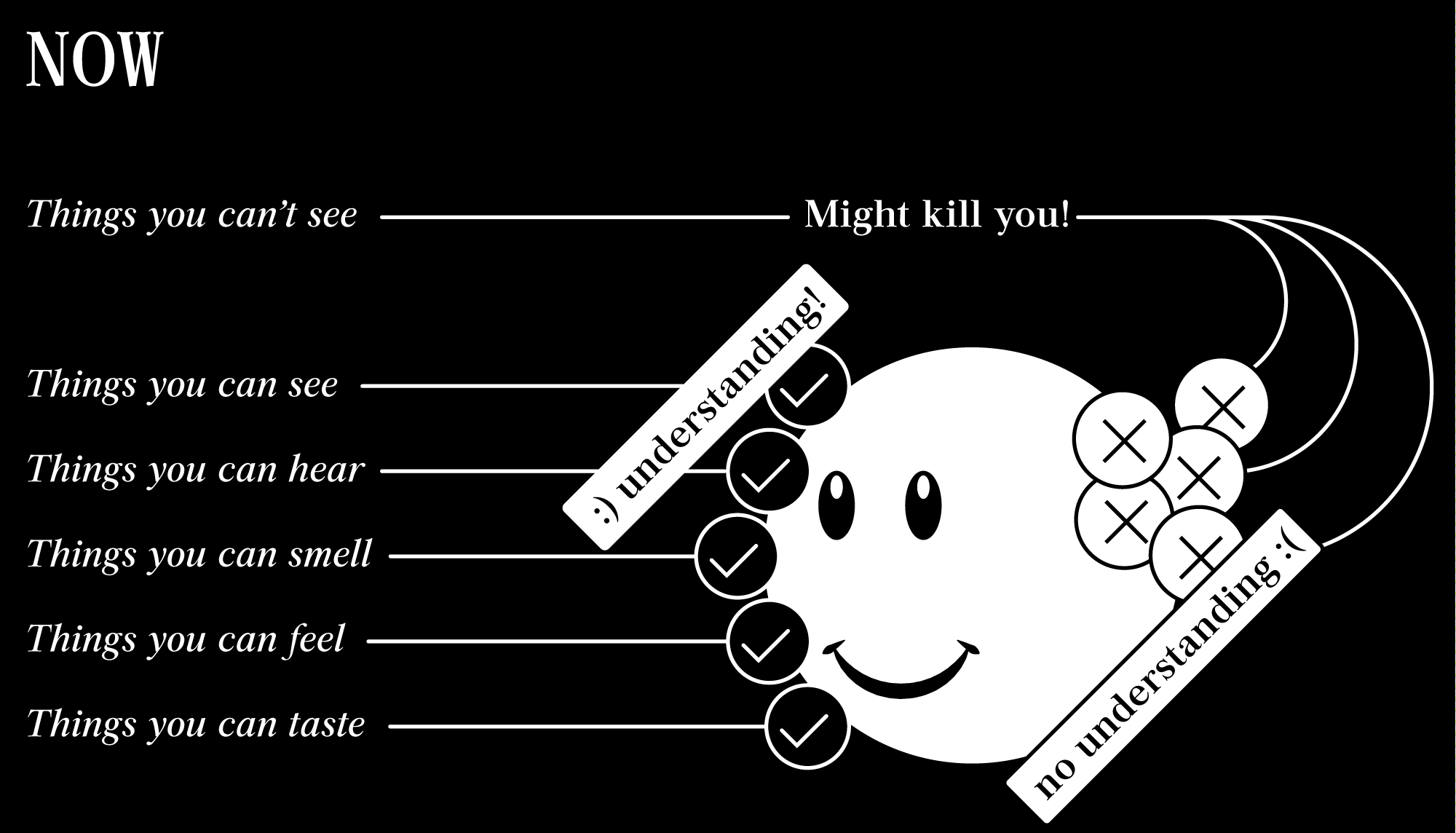 Nowadays there are infinitely more factors that can potentially affect the individual. The speed, quantity, noise, and interdependence of information is increasing exponentially. Your dependence on this information, other people, and vast systems is growing at the same rate. There are many more things that can impact you in direct or indirect ways, that you don’t or can’t perceive with your antiquated human body. We can refer to these factors as “imperceivables.” 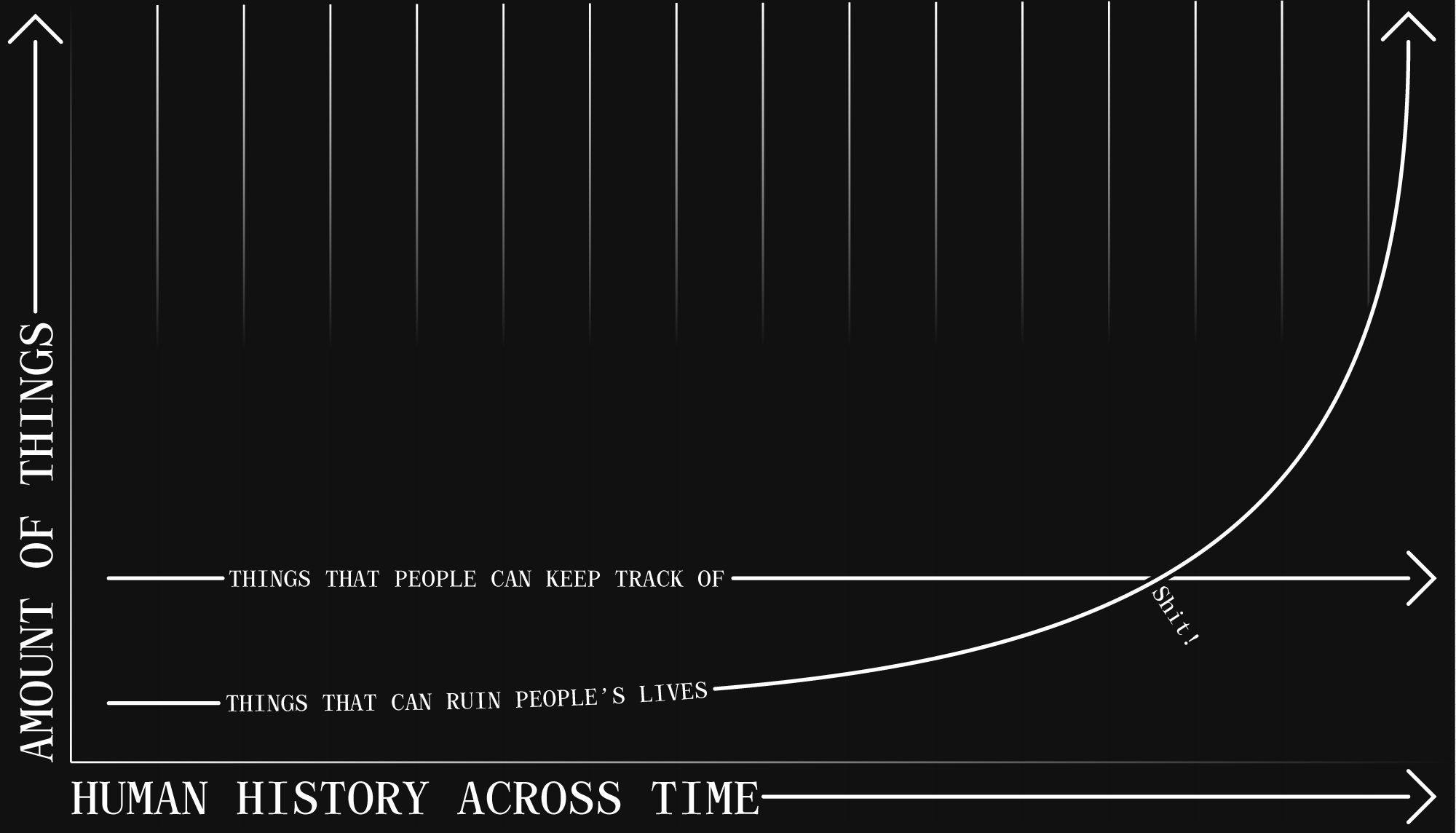 This is what a threat to human survival looked like 300 years ago: 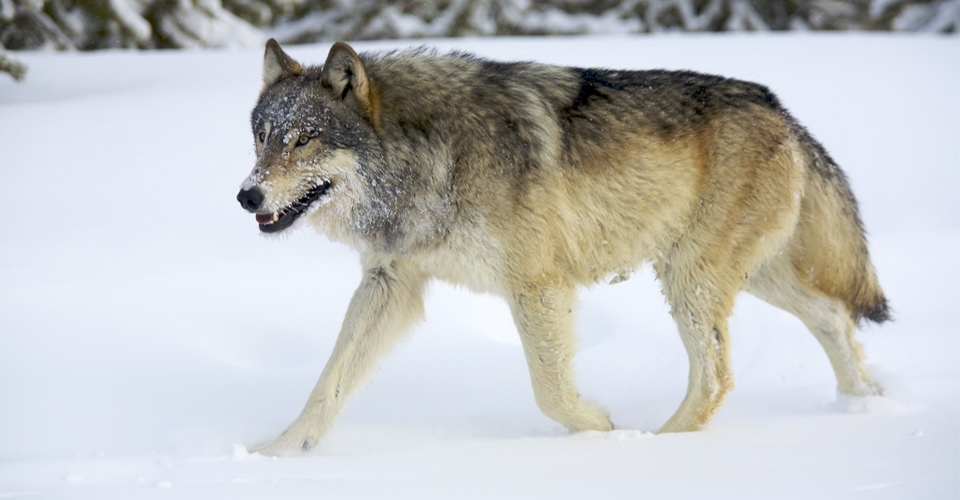 This is what a threat to human survival looks like today: 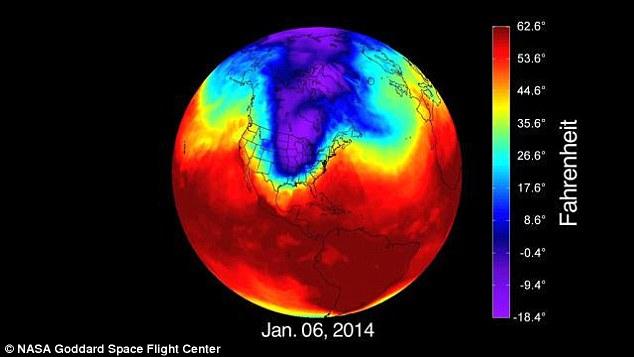 Visual communication has held unique sway over the human information landscape for recent cultural memory, defining our media, our rhetoric, and our history. The imperceivables we’re surrounded by are most often translated to a visual format, almost always of a very specific variety—numbers, words, charts, graphs, logic.

Each visualization is an act of attempted relay of the logic of these systems. But these visualizations can only relay so much logic. They are accurate to a fault in their sectioned-off domains, but there have to be bounds imposed upon information if it is meant to be understood through the lens of cause & effect.

You have to crop the picture to understand it—Where’s Waldo is much easier if there’s only three people in the frame. In contrast, “honest” visualizations that attempt to represent complex logic fail if you measure their success in terms of causal understanding. 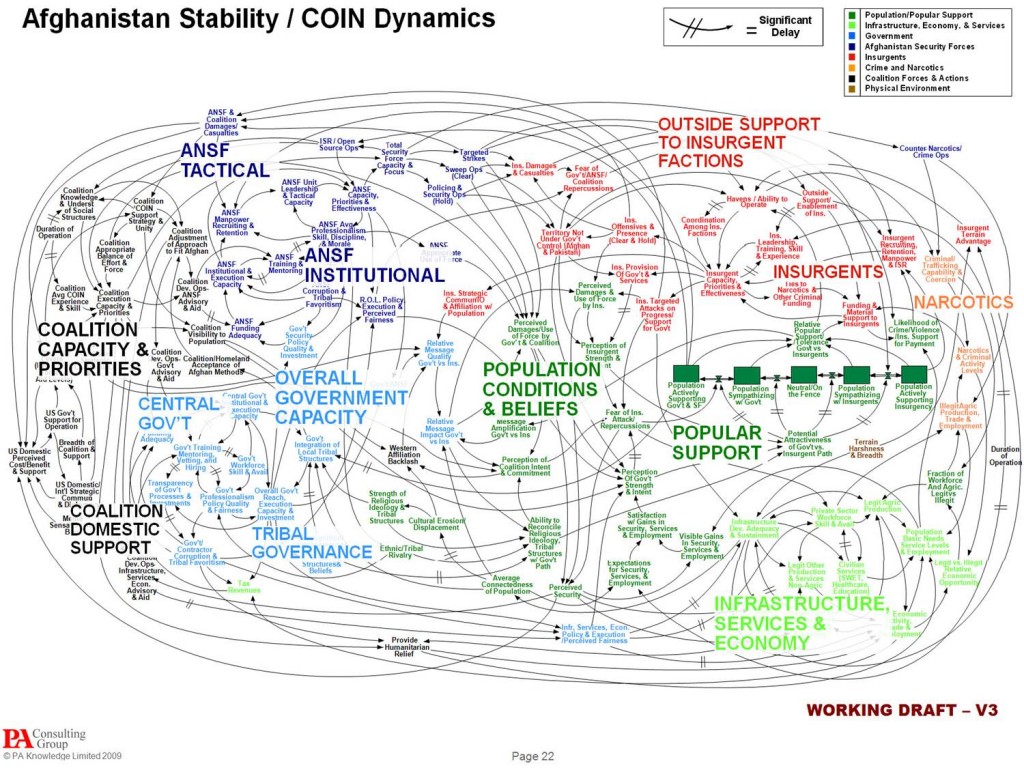 Of course, faced with the growing complexity, incomprehensibility and ever–changing nature of reality, it’s much easier to throw the towel in and believe it’s all the Illuminati, or the Bush administration, or some other single decision-making entity. Via Nick Scrnicek: “Conspiracy theories act by narrowing down the agency behind our world to a single figure of power (whether it be the Bilderberg Group, Freemasons, or some other convenient scapegoat).”

WHERE THIS PROJECT SITS

So how do we understand, talk about, or see imperceivables if we can’t visualize them logically and we don’t want to brutally simplify them? Obliquely, indirectly, emotionally, by approximation.

The ability to emotionally relate to and understand other individuals is the ability to comprehend the least logical system imaginable to mankind. We can navigate social patterns at a party where everyone is someone else’s ex.

This project is a set of explorations on the Methods that Impede Understanding, or the Things Beyond Understanding, and what they become when we map them to our senses. It is a series of proposals, vignettes, stories, and alternatives, as well as a formal investigation into the methods that simple, understandable things take to become complex, living, incomprehensible forces.

Speed, Multiplicity, Noise, Mistranslation and Interdependence are of key interest as methods that work on both visual and non-visual information.

You apply for a job, but the posting was filled within 10 minutes.

Your 401k fluctuated by hundreds of thousands of dollars 300 times in the last minute.

When information changes faster than the time it takes to process, it becomes purely sensual, experiential, aesthetic, divorced from logic.

You spend a year building an app for a platform that’s obsolete by the time you’re done.

Your shoes go from trendy to kitsch to ironic to forgotten to trendy in a week.

When there are 5 ants on a table, we can keep track of their movements fairly easily.

When there are 500 ants, we only see a writhing mass, even though each ant is behaving the same way.

When you have 15 friends, you know each of their hopes, dreams, and fears.

When you have 1,235 friends, Facebook has to remind you when their birthdays are.

When there’s one road in and out of town, you don’t need a stoplight.

When there’s 1000 roads, you install cameras, robots, and hire 100 traffic controllers to make sure people aren’t stuck in the same spot for hours.

The insight you’re looking for is lost in a muddle of unrelated signals—but there’s no way to pry them apart.

You don’t know what’s true anymore—there are too many varying signals, and maybe there was no true in the first place, it was just the only available option at the time.

Noise is searching through your twitter mentions for that one subtweet your friend may have said a month ago.

Noise is missing your potential employer in a sea of LinkedIn requests.

Noise is the website you can’t find anymore because there are too many websites with similar Google results, and they all have better SEO.

An alien comes down to Earth.

It can’t fit in, so it distorts its body until it looks human.

It can’t communicate with people, so it gives itself a mouth and ears and learns to speak.

It can’t move around, so it learns how to use the subway.

It can’t keep in touch with its friends, so it learns to use facebook.

It wants emotional support, so it starts a family.

It translates itself to fit into every platform of humanity.

Does anyone realize it’s different than they are?

When you can’t afford gas because thousands of trading bots built by 23–year–olds from Stanford crashed the oil market because a Saudi oil magnate tweeted from London at the wrong time in the year, it’s a bit harder to solve.